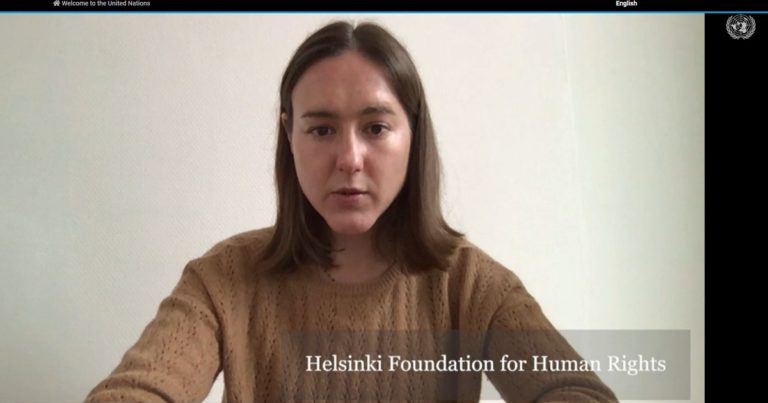 At the ongoing 49th session of the UN Human Rights Council, the International Campaign for Tibet (ICT)’s UN advocacy team have, on behalf of the Helsinki Foundation for Human Rights, delivered four statements on Tibet. The statements have highlighted the deteriorating situation inside Tibet, in particular, the continued attacks on human rights defenders, religious sites, the systemic use of torture, and the need to ensure unfettered access to Tibet.

High Commissioner’s planned visit to China in May 2022

This first session of the Human Rights Council for 2022 has been focused on Ukraine as well as news of a planned visit by the UN High Commissioner for Human Rights to China in May 2022. During her regular oral update on the activities of her Office and human rights developments, High Commissioner Michelle Bachelet announced that her office had “reached an agreement with the Government of China for a visit,” which would include “onsite visits to Xinjiang and other places”. International Campaign Tibet is calling on the UN High Commissioner to clarify the terms of her visit to China, and to include Tibetan areas into a visit, which can only be meaningful if unfettered access is fully guaranteed.

Metten warned, “silence by the Council only rewards and normalizes such repressive methods [used by China]. It signals to China that it is on track to decimate Tibetan culture with little international resistance.”

Metten’s statement was notably interrupted by a point of order by the Chinese delegation, complaining that it was “attacking the Communist Party” and “violating relevant rules and regulations”. The intervention was, however, unsuccessful, as the chairing Vice-President of the Human Rights Council allowed the statement to be continued. Another statement raising the situation in Tibet, delivered by the Society for Threatened Peoples, was also interrupted by a point of order from the Chinese delegation. ICT remains concerned about renewed attempts by the Chinese government to curtail freedom of speech and space for civil society at the Human Rights Council.

During the dialogue with the Special Rapporteur on Torture, Palmo Tenzin from ICT Germany, on behalf of HFHR, highlighted:

“Torture is routinely used to silence, permanently injure and even cause death when Tibetans have been arbitrarily detained for peacefully expressing their opinion or practicing their religion.” She called on the Special Rapporteur to “investigate the pattern of death by torture in Chinese detention”, and urged governments to refocus their energy on eliminating torture in countries, such as China, that are party to the Convention against torture.

In response to the Special Rapporteur on Human Rights Defenders’ report, Vincent Metten raised the case of the human rights and environmental defender, Anya Sengdra, who is serving a seven-year prison sentence for advocating for nomad rights and challenging government corruption. Metten called on “Human Rights Council Members to press China to ensure that adequate medical treatment is granted to Anya Sengdra and to immediately release him”.

The Item 4 General debate is an opportunity for governments and civil society to highlight human rights situations that require the Council’s attention. During the debate, Melanie Blondelle from ICT Europe, on behalf of the Helsinki Foundation for Human Rights, highlighted the recent attacks on Tibetan religion, education, and Tibet’s leading intellectuals. Blondelle cited the recent demolitions of Buddhist statues and structures in Drango county, Kardze Tibetan Autonomous Prefecture; the pervasive boarding school system used to disconnect Tibetan children from their families and communities; as well as the recent attacks on prominent writers, such as Go Sherab Gyatso and Rinchen Tsultrim.

During the General Debate, 14 countries[1] and the European Union highlighted China as a human rights situation of concern. Seven countries raised the concerning situation in Tibet: Denmark, France, Germany, The Netherlands, Sweden, Switzerland, and the United Kingdom. The European Union raised Tibet in a written statement, and notably called for the immediate and unconditional release of human rights activists, including Dorjee Tashi, Go Sherab Gyatso and Rinchen Tsultrim.

Nine countries[2] urged China to grant the High Commissioner for Human Rights unfettered access on her planned visit to China in May 2022, while seven countries[3] and the European Union [in a written statement] called on the High Commissioner to release the findings of her remote monitoring report on the human rights situation in Xinjiang.

The 49th Session of the Human Rights Council is ongoing and will end on 1 April 2022.

[3] France, Germany, The Netherlands, Switzerland, The United Kingdom, Australia, and the United States.